What is Rhino Disharmony?

Founded after the brutal killing of a rhino for its horn at Motswari Private Game Reserve, Rhino Disharmony is a movement to create a global voice against rhino poaching using art in all its forms – including painting, sculpture, music, writing, photography and any other artistic expression.

Our Rhino Residency initiative encourages the participation of artists to use their voice to reach fans and the informed public about the battle against poaching in Africa. Rhino Disharmony is driven to change the perception about the use of rhino horn and how it is fast tracking this species to extinction. We want to stop the demand for rhino horn by educating the next generation. There are many associations involved in rhino conservation, the ultimate aim is that we will finally reach tipping point in this war on animal trade.

Strong of more than 30,000 followers, the Rhino Disharmony social media sites, delivered in different languages all over the world (specifically Vietnamese and Chinese audiences) are a source of ongoing information regarding rhino poaching issues, a place for facts and a space for conversation. Each artist and participant can share their works and expression on the hub creating one central place for people from all parts of the world. 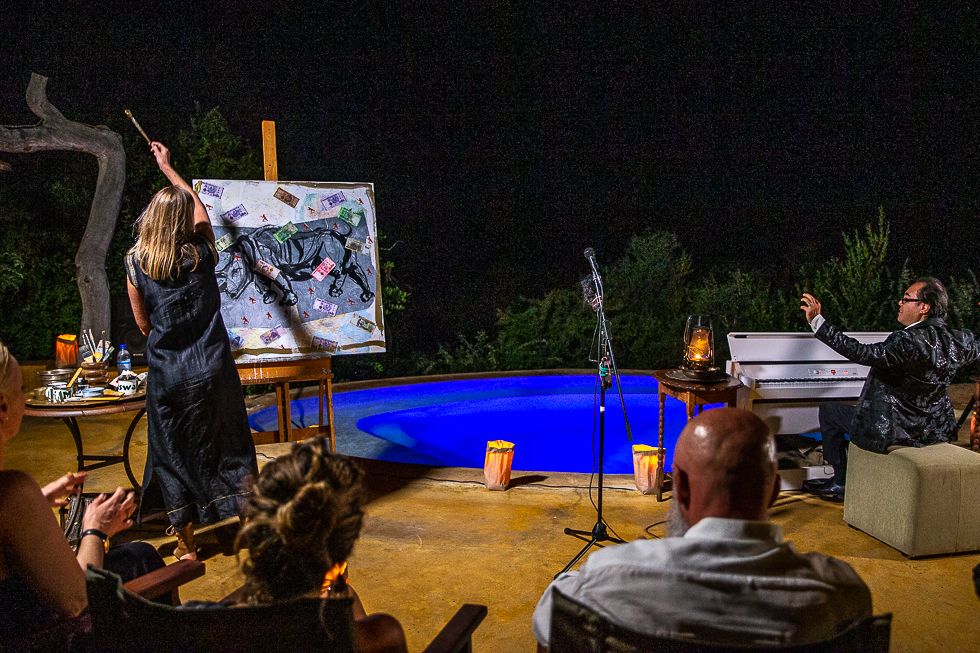 Motswari Private Game Reserve is a luxury safari lodge owned by the Geiger family for 45 years. Here, majestic creatures, including the Big Five, offer incredible viewing opportunities as they bask in their natural habitat. Motswari means “to conserve and protect” in Tswana and that is what the reserve aims to do.

The owners of Motswari, Marion and Fabrice, are also the founders of Rhino Disharmony. They have a desire and passion to make a difference in the war against poaching. This lodge, located within the Timbavati and Umbabat Private Nature Reserve, stretches out over 150 square kilometres. It has been in existence for over four decades and its friendly staff members are intrinsic to its success. Great emphasis is placed on personal attention, ensuring that each guest instantly feels at home in this stunning setting. The slogan for Motswari is “arrive as a visitor, leave as a friend” – nothing has been more accurate.

Marion is also a successful fine artist in her own right, she has personally taken responsibility for décor and feel of Motswari and those personal touches are evident throughout the lodge. The owners believe that art is a universal way to communicate, hence making Rhino Disharmony different to other associations in the rhino poaching arena.

Artist qualifications required to be considered:

What we need from you: